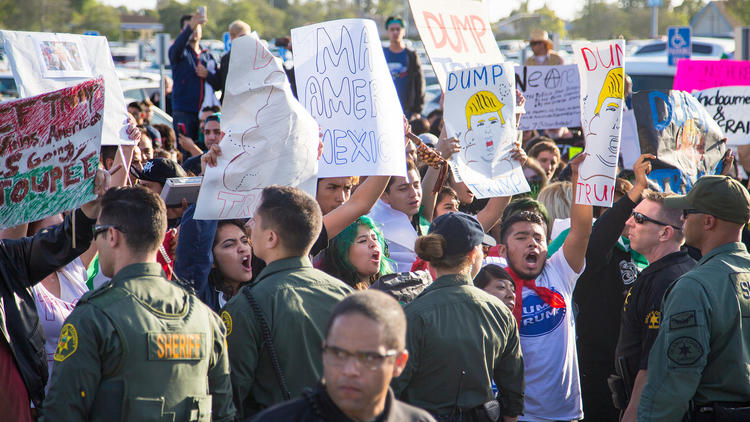 After initially being barred from wearing “Dump Trump” T-shirts because of safety concerns, a group of Latino students at Newport Harbor High School was allowed to wear the shirts on campus after the presumptive Republican presidential nominee’s rally in Costa Mesa.

On April 29, the day after billionaire businessman Donald Trump’s campaign appearance at the Orange County fairgrounds led to sometimes violent demonstrations outside the venue, Newport Harbor High prohibited all politically charged attire at the Newport Beach campus in response to the atmosphere in the community, Annette Franco, spokeswoman for the Newport-Mesa Unified School District, said in an interview Monday.

Franco said Newport Harbor’s principal, Sean Boulton, spoke with the students throughout the morning and expressed concern that the shirts were negatively affecting the campus’ educational environment and that he feared the students might encounter discrimination or harassment.

“Safety was at the forefront of our mind that morning,” Franco said.

The students were allowed to wear the shirts by the afternoon, she added.

Before Trump’s appearance in Orange County, graffiti and clothing both for and against him were reported at the campus, Franco said. Newport Harbor has about 2,400 students, 36% of whom are Latino.

Campus policy usually does not ban clothing with political overtones, provided it doesn’t contain profanity or libelous or discriminatory language, Franco said. Hats are an exception because no hats of any kind are allowed on campus, she said.
Some of Trump’s comments about Mexican immigrants and others have brought accusations of bigotry from his detractors, hundreds of whom protested outside his Costa Mesa rally.

On Friday, representatives of the Orange County Human Relations Commission met with about 60 Newport Harbor students on how to be politically involved while respecting one another’s differences. The commission is a regular advisor to the school’s Bridges Club, which works to build better relations among students.